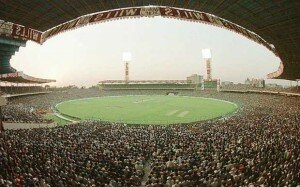 Eden Gardens is one of the venues for the IPL 2014. The stadium is located in Kolkata, West Bengal.

The ground is owned by the Indian Army and is operated by the Cricket Association of Bengal.

It is the home of the Bengal cricket team and the Indian Premier League’s Kolkata Knight Riders (KKR), as well as being a venue for Test, One Day International and Twenty20 International matches.

This iconic stadium was established in 1864. The first Test Match on this ground was played on 5th January 1934 between India and England.

The current capacity of the ground is 90,000 spectators.