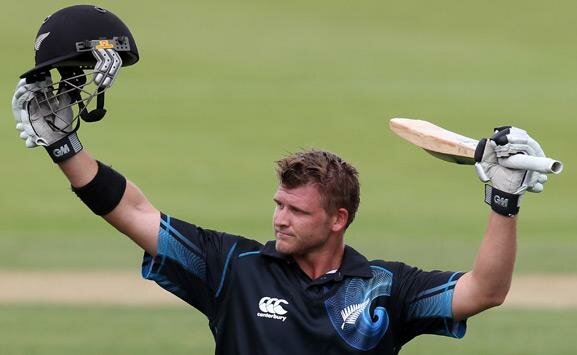 Corey Anderson is the new name on the block, especially for the players auction of IPL Season 7 (Pepsi IPL 2014).

Latest batting sensation from New Zealand Corey Anderson came into limelight on New Year’s Day in 2014 when he became the fastest centurion in the history of One-Day Internationals (ODIs) breaking Shahid Afridi’s record set in 1996.

Corey Anderson scored the fastest ODI century off just 36 balls trashing West Indies balling attack completely, and the innings was some of the cleanest hitting you will ever see in cricket,

With this knock, Corey Anderson will surely start the bidding war amongst IPL franchises for the IPL Season 7.

I am sure each franchise would want him in their squad for IPL Season 7.

If Anderson can carry on with this form, and show the same kind of attacking nous when India come for a visit later in the month, then the New Zealand all-rounder could just find himself bagging a huge IPL contract come February when IPL 2014 auctions take place on February 12, 2014.

After the match, West Indies skipper Dwayne Bravo, who was at the receiving end of a lot of those sixes and fours from the bat of Anderson, already began his recruiting drive, asking his IPL franchise the Chennai Super Kings to snap the New Zealand all-rounder up during the auction.

“Hope to see him in Chennai Super Kings, the auction is around the corner and hopefully MS [Dhoni] and Flem [coach Stephen Fleming] pick him up, it’s going to be a bonus for us, a great knock,” Bravo said.

“The way how the guy batted, it was not just slogging, you know he played proper cricket shots, that shows someone can bat, has the ability to bat, turn over strike ever so often, hit straight, hit clean, and he’s powerful, so why not. This innings is a big innings, it will do him a lot of favours.”

Note : Soon we will have Prayer Profile, Statistics and other details of Corey Anderson on our website. Visit again.