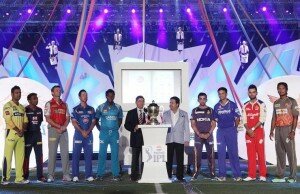 The Season 6 of the Indian Premier League (IPL) has started from 3rd April 2013.

The finals of the tournament will be played on 26th May 2013.

Its the time for all cricket fans around the world to guess who will be the winner of IPL 2013.

Participate in the Opinion Poll Below and Predict the Winner of IPL 2013. Will it be defending champion Kolkata Knight Riders (KKR) or the most successful team in IPL history so far – Chennai Super Kings (CSK) or it will be one of the newcomers – SunRIsers Hyderabad or Pune Warriors, or from the remaining five IPL teams.

Poll : Who will Win Eliminator Match of IPL 2013

Poll : Should Pepsi Pull Out of IPL Sponsorship