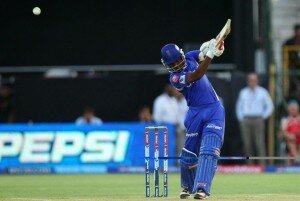 Yesterday, Sanju Samson became the youngest player in the history of Indian Premier League (IPL) to score a half century in IPL.

Samson, at 18 years 169 days, is the youngest batsman to record a fifty at the IPL, eclipsing Shreevats Goswami (19 years and 1 day) for Royal Challengers Bangalore against Delhi Daredevils at Bangalore on May 19, 2008.

Yesterday, Sanju Samson had scored 63 runs off 41 balls, his maiden fifty in Twenty20 format of the game. Sanju received Man of the Match Award for his innings, his first Man of the Match award at the IPL.

Sanju Samson’s previous highest in the T20 format of the game was 41 not out off 38 balls for Kerala against Odisha at Indore on March 29, 2013 in the Syed Mushtaq Ali Trophy.