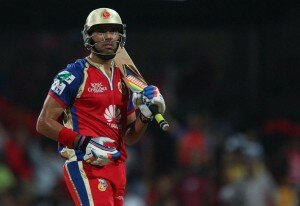 In the match no. 37 of the season 7 of Indian Premier League (Pepsi IPL 2014),  Royal Challengers Bangalore (RCB) beat Delhi Daredevils (DD) by 15 Runs.

Having won the toss at the M.Chinnaswamy Stadium in Bangalore, Delhi Daredevils elected to field first.

Chris Gayle and Parthiv Patel played well initially giving the team a good start but then after they got out it was AB de Villiers who scored a quick fire 33 of 17 balls but today it was raining sixes from the bat of Yuvraj Singh who scored unbeaten 68 runs of just 29 balls to help his team reach a score of 186/4 in 20 overs. Yuvraj Singh hit 9 sixes in his innings.

For Delhi Daredevils, Mohammed Shami, Siddarth Kaul and Rahul Shukla picked up one wicket each.

Chasing this big score, Delhi Daredevils had a poor start with Murali Vijay getting out in the first over itself. Quinton de Kock followed him and they team were 10/2 in the 2nd over. Mayank Agarwal and Kevin Pietersen had a good partnership to keep Delhi alive in the match. Mayank Agarwal got out after scoring 31 runs of 25 balls. Soon Kevin Pietersen got out after scoring 33 runs of 29 balls. In the end JP Duminy played well scoring 48 just of just 30 balls but once he got out it was all over and in the end Delhi Daredevils ended their innings on 170/7 loosing the match by 16 Runs.

For Royal Challengers Bangalore, Muttiah Muralitharan and Mitchell Starc picked up two wickets while Abu Nechim and Yuzvendra Chahal picked up one wicket each.

Yuvraj Singh was named the Man Of The Match for his brilliant batting performance in the match.