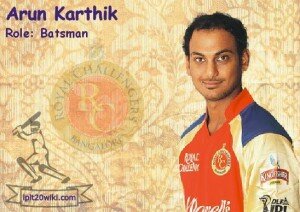 Born on 15th February 1986, Konda Rhaskir Arun Karthik (commony known as Arun Karthik) is an domestic Indian cricketer who plays for Tamil Nadu in the domestic cricket. He also plays in the Indian Premier League (IPL).

Arun Karthik is a right-hand batsman and leg-spin bowler.

The 27-year-old scored a century on his first-class debut against Karnataka in 2008-09 and sealed his spot in the state team and also found a place in Chennai Super Kings team in IPL 2010. However he got a chance to play only one match in IPL 2010.

However he has not got enough chances to play on field with the team already having many star cricketers.

Lets hope that he gets more chances to play for the team in IPL 2013 and he perform well.