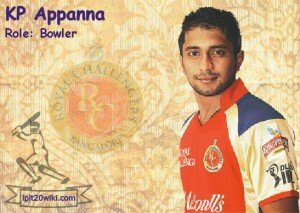 In the 2011-12 domestic season, he was his state team’s leading wicket-taker in the Ranji Trophy with 28 wickets from eight matches.

In his IPL career of four seasons with Royal Challengers Bangalore, he has played in 14 matches and has taken 9 wickets.

Once again he will be playing for Royal Challengers Bangalore in IPL 2013. Lets hope that he gets more matches to play this season and can take more wickets for his team.