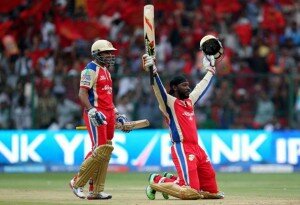 Chris Gayle, an explosive opening batsman of Royal Challengers Bangalore (RCB) became successful in creating history by scoring the fastest Hundred in the history of IPL Cricket by hitting 8 boundaries and 11 massive sixes in just 30 balls. Surely that is something wow…!

With this hundred he breaks the previous fastest century record held by Yusuf Pathan who scored his ton in 37 balls.

Gayle slaughters all the bowlers  by scoring more than 20 runs in each of their overs. These bowlers included Ishwar Pandey, Mitchell Marsh, Bhuvneshwar Kumar, Ali Murtaza and Aaron Finch.

Is he from this planet? Insane striking!

Chris Gayle goes on his knees to acknowledge a stadium that’s going as ballistic as the man himself.

In this Chris Gayle IPL 2013 Century Video you can see all the fours and sixes hit by Chris Gayle.