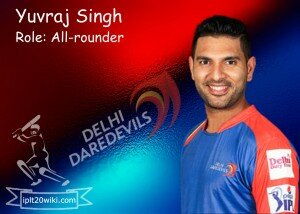 Born on 12th December 1981, Yuvraj Singh is an Indian international cricketer and also plays in the Indian Premiere League.

Yuvraj is a left-hand middle-order batsman and a slow left-arm orthodox bowler.

He has been a member of the Indian cricket team in ODIs since 2000 and played his first Test match in 2003. He was the vice-captain of the ODI team from late-2007 to late-2008. At the 2007 World Twenty20, he famously hit six sixes in an over against England’s Stuart Broad — a feat performed only three times previously in any form of senior cricket. He was named the Man of the Tournament in the 2011 Cricket World Cup and was one of the top performers at the 2007 World Twenty20, both of which India won.

From 2008 to 2010 IPL seasons he played for the Kings XI Punjab team and in 2011 he was associated with the Pune Warriors India team. He missed the 2012 season due to his cancer treatment and then again played in 2013 for Pune Warriors India and scored just 238 runs in 13 matches played last year.

In players auction for IPL 2014, he was bought by Royal Challengers Bangalore for Rs. 14 Crore becoming the most expensive player of IPL 2014.

In players auction for IPL 2015, he was bought by Delhi Daredevils for Rs. 16 Crore making him the most expensive player of IPL 2015.

Lets hope that we plays up to his potential and performs well for the Delhi Daredevils team in IPL 2015.