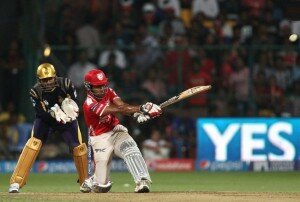 Wriddhiman Saha made a brilliant century in the most important match of the tournament scoring unbeaten 115 runs of just 55 balls.

He hit 10 fours and 8 sixes in his innings. He took on all bowlers especially Sunil Narine.

After having a poor start loosing a few wickets, it never looked that Punjab will reach anywhere close to 200 runs, but it was Wriddhiman Saha who played brilliantly and hit bowlers to all corners.

I am sure people would have expected fireworks form Maxwell and Miller in the final match of the tournament but it was Wriddhiman Saha who rose to the occasion and single-handedly scored more than 50 percent of the runs. He was supported well by Manan Vohra who made a half century scoring 67 runs of 52 balls.

In this match Maxwell got out for duck on the first ball that he faced while Miller got only one ball to face of which he scored 1 run.

With this century, Wriddhiman Saha became the first player to have scored a century in the finals of IPL. Previous best was 95 runs scored by Murali Vijay.