Considered to be one of the most destructive batsmen in the world, Virender Sehwag (affectionately known as Viru and the Nawab of Najafgarh) is an aggressive right-handed opening batsman and a part-time right-arm off-spin bowler who plays for Indian national side in test matches, ODI’s and T20 cricket matches.

He plays for Delhi in the domestic cricket and also plays in the Indian Premier League.

With minimal footwork, but great hand-eye coordination, Sehwag goes after every delivery that deserves to be hit. He plays in that manner even in the five day version of the game.

Sehwag was the “Icon” player for the Delhi Daredevils when the IPL was formed, and has remained with the franchise ever since. 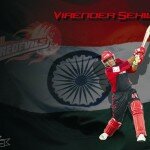 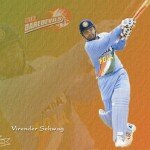 If you are fan of Virender Sehwag, then you can set these Virender Sehwag IPL 2013 Wallpapers on your Desktop, Laptops or screens of your Mobile Phone.