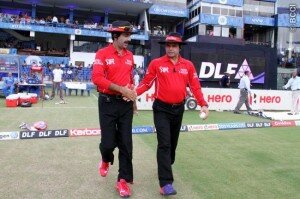 As you all know, umpire is the most crucial part of any cricket match. He has a huge responsibility on his shoulder, as he is a person who has the authority to make judgements on the field. There are two on-field umpires, who apply the laws, make all necessary decisions, and relay the decisions to the scorers and there is a third umpire who looks into the TV replays.

Only four men have served as IPL umpires in both the first season and the latest season, these are – Billy Doctrove, Asad Rauf, Billy Bowden and Aleem Dar; while 14 umpires have served in only one season.

Please find below the list of umpires who have served in IPL so far.