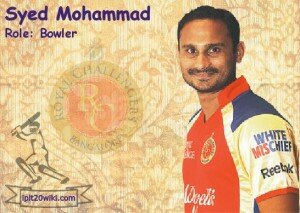 Born on 3rd June 1983, Jamaluddin Syed Mohammed is an Indian cricketer who plays for Tamil Nadu in the domestic cricket. He also plays in the Indian Premier League.

Mohammed was signed by the Royal Challengers Bangalore ahead of IPL 2011 and has so far played 7 IPl matches for the team in which he has taken 5 wickets at an average of 38.40.

Lets hope that he gets more chances to play for the Royal Challengers team in IPL 2013.