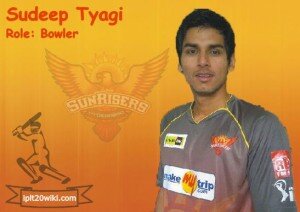 Born on 19th September 1987, Sudeep Tyagi is an Indian cricketer who has played few ODI’s for Indian. He plays for Uttar Pradesh in the domestic cricket. He also plays in the Indian Premier League.

Sudeep Tyagi is a right-arm medium fast bowler. He made a big impact in his debut season in the 2007 Ranji Trophy and ended up being the leading wicket-taker in the tournament.

Lets hope that Sudeep Tyagi gets more chances to play in IPL 2013 for the SunRisers Hyderabad.