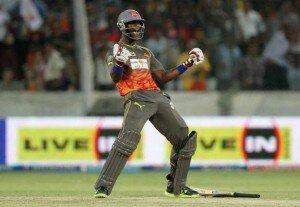 In match no. 72 of Season 6 of the Indian Premier League (IPL 2013), playing at their home ground in Hyderabad, SunRisers Hyderabad defeated Kolkata Knight Riders by 5 Wickets and went into the playoffs of IPL 2013.

In reply, SunRisers Hyderabad had a good start with both openers Parthiv Patel and Shikhar Dhawan scoring 47 and 42 respectively. In middle they lost few wickets but in the end chased the score in 18.2 overs loosing five wickets.

Parthiv Patel was named Man of the Match for his brilliant batting effort.

Please find below the Full Match Highlights Video of the SunRisers Hyderabad vs Kolkata Knight Riders (SRH vs KKR) – IPL 2013 Match 72 played at the Rajiv Gandhi Stadium in Hyderabad.

This 18 minute match highlights video of the SunRisers Hyderabad vs Kolkata Knight Riders IPL 2013 match covers all the fours, sixes hit and the wickets that fell.