Shikhar Dhawan likely to play in IPL 2013 after 10 days 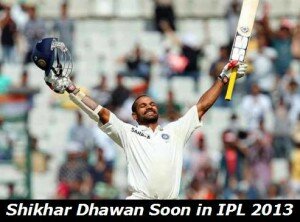 Shikhar Dhawan who made shot to fame with his test debut against Australia last month where he scored 187 runs of 174 balls and broke the record of Fastest Century on Test Debut Ever, is soon recover from injury and return to play for his team SunRisers Hyderabad in IPL 2013.

Yes, according to latest media reports, Shikhar Dhawan is likely to recover fully and return to IPL 2013 action in next 10 days time.

Having missed the first two weeks of the Indian Premier League (IPL) due to a fracture on his hand, Sunrisers Hyderabad batsman Shikhar Dhawan is hoping to return to action “very soon” and is awaiting a clearance from the National Cricket Academy (NCA) after recovering from injury.

Currently this 27-year-old left-handed explosive batsman is back in India after spending time with his family in Melbourne.

Recently SunRisers Hyderabad coach, Tom Moody, tweeted, “we are hopeful it’s within the next 10 days.”

Dhawan suffered the injury during the Mohali Test against Australia last month after which he was ruled out for six weeks after sustaining the injury.