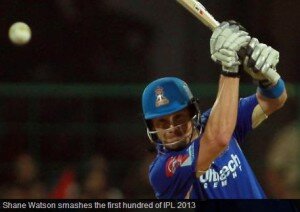 With this Hundred he beat the previous highest record of Virender Sehwag who scored unbeaten 95 runs yesterday against Mumbai Indians.

Today in the 30th match Indian Premier League Season 6 between the Rajasthan Royals and Chennai Super Kings (RR vs CSK) at the MA Chidambaram Stadium in Chennai, Rajasthan Royals had won the toss and had elected to bat.

Shane Watson’s century helped the team to reach the score of 185/4 in 20 overs.