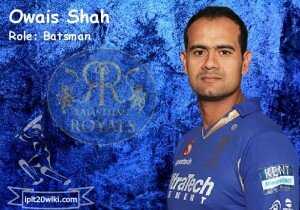 Born on 22nd October 1978, Owais Alam Shah is an English cricketer who played for England in all forms of the game.

He also plays in the Indian Premier League.

He played the inaugural IPL season in 2008 for the Delhi Daredevils team. Then he was the part of Kolkata Knight Riders in IPL 2009 and IPL 2010. In 2011 he played for Kochi Tuskers Kerala.

In 2012 he signed up for Rajasthan Royals and will once again play in IPL 2013 for the Rajasthan franchise.

Despite being a batsman in the classical mould, Shah is a good striker of the ball in Twenty20s.