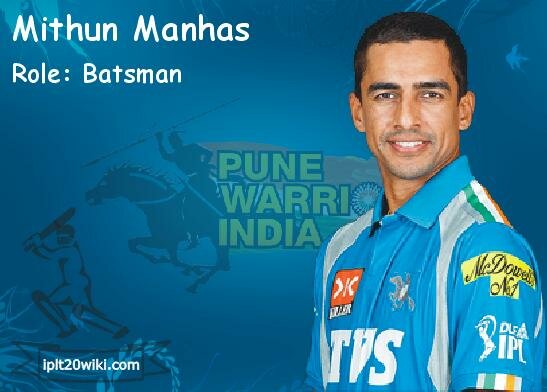 Born on 12th October 1979, Mithun Manhas is an Indian first-class cricketer who plays for Delhi. He also plays in the Indian Premiere League.

He is an all-rounder – a right-handed batsman, he also bowls right-arm offbreak and can keep wickets.

The 33-year-old has impressive numbers in both first-class and List A cricket. Averaging over 45 in both formats of the game.

Manhas is known to rotate the strike and score the occasional boundary.

From 2008 to 2010 he qwas part of the Delhi Daredevils team. In the fourth season of IPL he was contracted for US$260,000 by Pune Warriors and he currently plays with Pune Warriors India IPL team.

In the the current IPl season – IPL 2013 he will once again play for the Pune Warriors India team.