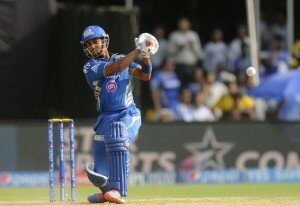 Today in match no. 44 of IPL 7, Lendl Simmons once again played a brilliant know for Mumbai Indian against Rajasthan Royals at the Motera Stadium in Ahmedabad.

Today Lendl Simmons scored 62 runs of just 51 balls and was looking in good touch before he got out. He hit 6 boundaries and 2 sixes in his innings.

This West India who was bought into the Mumbai Indians as replacement of injured Jajaj Saxena has played well so far this season. He has scored 180 runs from 4 matches.

Earlier winning the toss, Mumbai Indians chose to bat first and both the openers had a hundred run plus partnership. At the other end, Michael Hussey scored 56 runs of 39 balls.

If Mumbai openers would have come to such form earlier in this season, then Mumbai Indians could have had a chance to reach the play-offs of IPL 2014 !

Anyways you can watch the highlights video of Lendl Simmons 62 Run of 51 Balls against Rajasthan Royals below.