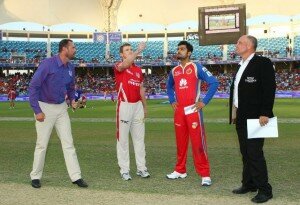 Having won the toss at the Sharjah Cricket Stadium, Kings XI Punjab elected to field first.

Chris Gayle gave a superb start to Royal Challengers Bangalore scoring 20 runs of the first over hitting 2 fours and 2 sixes. But he got out in the second over itself and then and then RCB kept loosing wickets at regular intervals. Yuvraj Singh played a handy knock scoring 35 runs of 32 balls. In the end Royal Challengers Bangalore reached a score of 124/8 in their 20 overs.

Chasing this manageable score, Kings XI Punjab had a decent start but once Cheteshwar Pujara got out there was a fall of few wickets. Virender Sehwag scored 32 runs while David Miller scored 26 runs. Rishi Dhawan and George Bailey kept their cool and went the game for Punjab. Rishi Dhawan scored unbeaten 23 runs while Bailey was unbeaten on 16. In the end Punjab chased the target in 18.5 overs loosing 5 wickets.

For Royal Challengers Bangalore, Varun Aaron and Yuzvendra Chahal picked up two wickets each while Ashok Dinda picked up one wicket.

This is fifth straight win for Kings XI Punjab this season.

Sandeep Sharma was named Man of the Match.