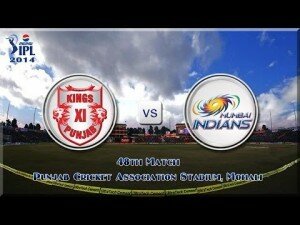 IPL 7 Match LIVE Today : The 48th match of the Season 7 of the Indian Premier League will be played between Kings XI Punjab (KXIP) and Mumbai Indians (MI) on 21st May 2014 at the Punjab Cricket Association Stadium, Mohali.

Kings XI Punjab are in top form with 9 wins from 11 matches while Mumbai Indians have won 4 and lost 7 games his season.

In their last game, Mumbai played well defeating Rajasthan Royals convincingly. This win would give Mumbai some confidence.

Also Mumbai were the first team to defeat Kings XI Punjab this season. They had defeated Punjab by 5 wickets at the Wankhede Stadium on 3rd May 2014.

Prior to the start of this season, Kings XI Punjab (KXIP) and Mumbai Indians (MI) have played 12 times against each other.

Kings XI Punjab has won 7 out of the 12 games played while Mumbai Indians has managed to win remaining 5 games.

Pitch Report: The wicket at the Punjab Cricket Association Stadium, Mohali is usually a dry pitch that aids the slower and spin bowlers and could be hard to score on. The toss will play a crucial role in the match.

Live Scores, Ball-by-Ball Commentary and Updates of all 60 matches of IPL 7 will be available on Official Website of IPL – www.iplt20.com