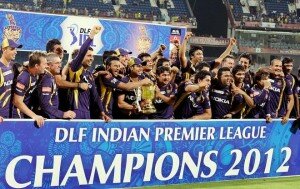 In the finals of the IPL 2012 (Season 5 of IPL) held on 27th May 2012 at the M. A. Chidambaram Stadium in Chennai, Kolkata Knight Riders (KKR) defeated the Chennai Super Kings (CSK) and prevented them from creating a Hat-trick of IPL titles, having previously won the tournament in 2010 and 2011.

It was the first title win for the Kolkata Knight Riders.

Chennai Super Kings won the toss and elected to bat.

In reply, Manvinder Bisla fired all guns for Kolkata Knight Riders scoring 89 of 48 balls and Jacques Kallis scored 69 of 49 balls helding their team to reach their target in 19.4 overs just 2 balls to spare.

In the end, Kolkata Knight Riders won the IPL Trophy & Champions title for the first time.