IPL Spot-fixing: Who is Gurunath Meiyappan? 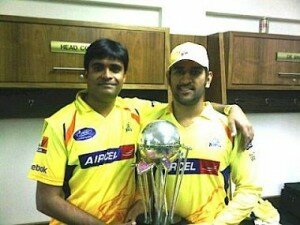 The ongoing saga of spot-fixing in IPL is widening and now there are fears that it may sweep the top brass of the BCCI after the name of board president N Srinivasan’s son-in-law Gurunath Meiyappan cropped up on Wednesday during Mumbai Police’s investigation into the case.

The Mumbai police has said that they will question BCCI President N Srinivasan’s son-in-law Gurunath Meiyappan in connection with the betting racket in which actor Vindoo Dara Singh was arrested yesterday.

Gurunath was allegedly in constant touch with Vindoo and it is because of this constant contact that the police decided to call him in for questioning.

Today people are busy searching Who is Gurunath Meiyappan ?

Gurunath who is in his late 30s, has three children with Srinivasan’s daughter Rupa.

Gurunath hails from an affluent South Indian family that owns AVM – a high-profile film and TV serial production house of South India. He is the son of AVM Balasubramanian who is the brother of AVM Saravanan.

Apart from that, Gurunath has played Golf and motor racing at competitive levels. He has won the Palani Hills Open amateur golf tournament multiple times and has competed in Formula Asia.

The involvement of Gurunath in the spot-fixing scandal emerged after the arrest of Vindoo Dara Singh on Tuesday. Vindoo reportedly placed several bets on behalf of Gurunath. Earlier on Wednesday, reports emerged that Vindoo had made several calls to a Chennai number and admitted to being in touch with a relative of the CSK franchise owner.

Police sources, however, say there is no evidence of spot-fixing against Gurunath, but only of heavy betting, which is illegal.