IPL Fixing : Brendon McCullum was asked by a cricket ‘hero’ to fix matches 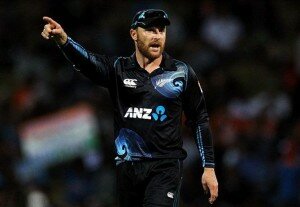 In a shocking revelation, New Zealand captain Brendon McCullum has told ICC’s anti-corruption investigators that a cricketing “hero” approached him in 2008 to fix matches ahead of the inaugural edition of IPL, offering him huge sums of money.

The Daily Mail reported on Monday that it believed McCullum had told the ICC he had turned down offers of up to $180,000 to underperform in matches.

Brendon McCullum is currently playing for Chennai Super Kings in the 7th edition of Indian Premier League (Pepsi IPL 2014) and confirmed last night he was returning home this week for the birth of his third child.

McCullum told investigators he was first approached in 2008 in Kolkata before the start of the inaugural edition of IPL.

He told investigators that the star – known as X – telephoned him to meet at his hotel to discuss a “business opportunity”.

“We spent some time talking about various things over dinner,” McCullum said.

“During the course of this conversation he asked me if I knew what spread betting was in cricket games. I told him not really, so he took a piece of paper and wrote down and explained the process to me.

“I was really shocked as I saw X as a good friend and it totally confused me. X said that everybody was doing this in games.

“He said that the ‘Big Boys’ in international cricket were doing it and he didn’t want me to miss out.”

McCullum told investigators X explained the basic principles which were to score below a certain rate for the first six or so overs and then towards the end of the game there was another split.

“X told me he had a good group working for him in the ICL and I understand this to mean fixing for him,” McCullum said.

“It was my opinion then, as it is now, that X was actively concerned in fixing . . . I believed he was asking me to do the same thing for him in the IPL as others were doing in the ICL.”

Despite McCullum saying he has “never, ever fixed”, he didn’t have the courage to say no immediately and instead said he would think about it, before returning to his hotel in a “state of shock”, his evidence stated.

Later the star telephoned him and McCullum told him he was not interested.

“He was a hero who became a friend so I always found it difficult to say no,” McCullum said.

This news comes at a interesting time when cricket and IPL in particular is trying to clean up the spot fixing mess which came to limelight last year.

I am sure you would definitely want to know the name of the Cricket Hero or X that Brendon McCullum has named ???