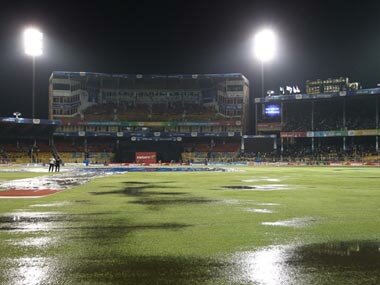 The first qualifier match of the season 7 of Indian Premier League (Pepsi IPL 2014) which was scheduled to take place today, May 27 at the Eden Gardens has been postponed to Wednesday due to torrential rain in Kolkata for the past few days.

The match will now be played at 4 pm, while the eliminator in Mumbai, between Mumbai Indians and Chennai Super Kings, will be played at 8 pm as scheduled.

If the weather or ground conditions do not permit a full game in Kolkata on Wednesday as well, overs will be reduced till it is a five-over-a-side affair. If even that is not possible, as per the playing conditions, the winner will be decided via a Super Over. The latest the Super Over can begin is 9.10 pm.

If that, too, is ruled out, then the side which finished the league stage with more wins – that is, Kings XI – will go through to the final.

Today at 5.15 pm, umpires Nigel Llong and S Ravi inspected the ground with curator Prabir Mukherjee and decided that it was impossible for it to be made match-fit in time for even a five-overs-a-side game today, prompting the early postponement.