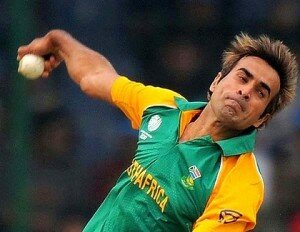 According to media reports, Delhi Daredevils will most likely rope in South African leg-spinner Imran Tahir as a replacement of injured Nathan Coulter-Nile.

Coultier-Nile got injured while fielding in Daredevils’ match against Chennai Super Kings (CSK) three balls into the match. He was subsequently ruled out for the entire edition of the tournament.

Imran Tahir was not picked at the players auctions for IPL 2014 but had a fantastic ICC World T20 in Bangladesh where he was one of the top wicket-takers with 12 scalps in the tournament at a very economical average.

Also Tahir’s experience of having plied his trade in T20 cricket in England and South Africa will also come in handy. He has played 12 T20 Internationals, taking 21 wickets. He has also played 91 T20 matches, taking 99 wickets with a decent economy rate of 6.42.

“Tahir is the likely choice as DD is desperately short on their spin department. There were talks of him joining the team in UAE but it has been delayed. Hopefully, it will be cleared in a day or two,” a BCCI official involved with IPL activities told PTI today.