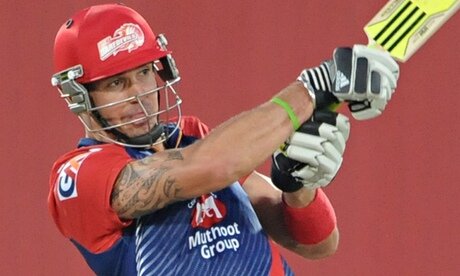 Delhi Daredevils suffered a big jolt ahead of their IPL campaign as captain Kevin Pietersen was ruled out of their opening match after suffering from a finger injury.

Pietersen who was bought by Delhi based franchisee for Rs. 9 Crore in players auction for IPL 2014 was meant to captain Delhi against Royal Challengers Bangalore in Sharjah.

Dinesh Karthik captained the team in their opening game of the season against Royal Challengers Bangalore in absence of the injured Kevin Pietersen.

IPL 2014 is the new chapter in Kevin Pietersen’s post-England career. He was sacked from the team in the wake of England’s 5-0 Ashes whitewash in Australia last winter, which made him available for a full IPL season for the first time.

For Royal Challengers Bangalore, Chris Gayle was missing due to a back injury.