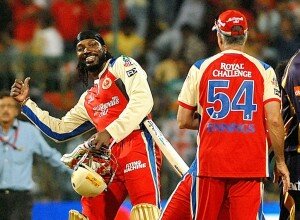 Power hitter Chris Gayle missed the opening game of the season for his team Royal Challengers Bangalore due to an back injury.

Playing against Delhi Daredevils, Royal Challengers Bangalore had Nic Maddinson in the team in place of Chris Gayle. Making his IPl debut, Australian batsman Nic Maddinson will open the innings for RCB when they get in the batting.

Chris Gayle suffered a back injury during practice sessions. He is expected to play RCB’s next match against Mumbai Indians on April 19th, 2014.

Chris Gayle was the winner of the Orange Cap, for being the top scorer in the IPL, in 2011 and 2012. hence he was retained by the Vijay Mallya owned franchise for the seventh edition of the Indian Premier League (IPL).

In today’s match even Delhi Daredevils had an injury. Captain Kevin Pietersen was injured.