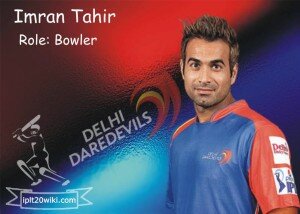 Imran Tahir is a leg break bowler and right-handed batsman.

Earlier Tahir has represented Pakistan Under-19 cricket team’s and Pakistan A but he failed to win full international honours for Pakistan. Tahir is married to Sumayya Dildar, a South African of Indian descent, and has represented South Africa after becoming eligible to play for them when he met his four-year residence requirement in April 2009.

He joined Delhi Daredevils in IPL 2014 as a replacement of injured Nathan-Coulter Nile and played in 6 matches for the team taking 9 wickets.

Imran Tahir will once again play for Delhi Daredevils in IPL 2015.