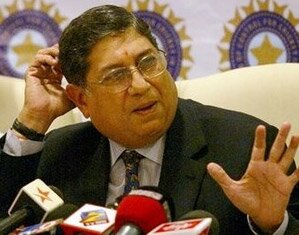 As told you earlier, BCCI chief N Srinivasan was scheduled to address the media at 4 pm on Sunday at the Crystal Room, Taj Bengal, Kolkata ahead of todays final of Pepsi IPL .

In his address to the media, N Srinivasan again said that he will not resign as he  has done nothing wrong.