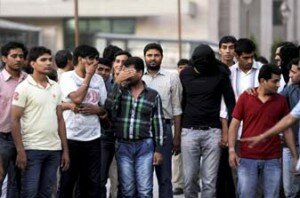 After arresting three Rajasthan Royals Players S. Sreesanth, Ajit Chandila, Ankeet Chavan in early hours of Thursday morning from Mumbai on charges of Spot fixing in matches of ongoing IPL season 6, Delhi Police read out the excerpts of tapped conversations between bookies and IPL cricketers during a press conference in Delhi announcing the arrest of three players and 11 bookies allegedly involved in spot-fixing.

The first conversation was before a match between Pune Warriors and Rajasthan Royals on 5 May 2013 allegedly between player Ajit Chandila and a bookie Amit::

Note : Some excerpts, translated from Hindi.

Ajit Chandila: Yes, tell me brother.
Bookie: Do the first over with lot of confidence and in the same way bowl in the second over.
Ajit Chandila: ok, ok will do.
Bookie: what will be your signal.
Ajit Chandila: I will pick up my t-shirt twice. And will then look up at the sky before starting the over.

According to police, Ajit Chandila had to give 14 runs for which he had to carry out predetermined signals before starting the over. However, he forgot to give the signals as a result of which the bookies could not bet in this match and this led to lot of arguments. The deal was fixed over Rs. 40 lakh. Chandila was given advance of Rs.20 lakh for the job which he had to return as he had failed to give bookies the signal.

The second conversation was allegedly between Sreesanth’s close friend Jiju Janardhan and a bookie Chand before 9 May match between Rajasthan Royals and Kings XI Punjab. Sreesanth was to give away 14 runs in the second over he bowled.

Chand: What will be the signal?
Jiju: I have told him. He will not do any thing which is unusual. He will tuck in a towel before bowling the second over.
Chand: Brother please advise him to give us some time before starting the over as we can start our booking.
Jiju: Yes ok.

The third conversation was between players Ajit Chandila and Ankeet Chavan before yesterday’s match between Rajasthan Royals and Mumbai Indians. Chandila was not playing and allegedly “motivated” Chavan convincing him to give at least 13 runs in his second over.