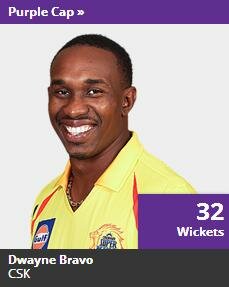 West Indian Cricketer Dwayne Bravo who plays for Chennai Super Kings (CSK) has become the Winner of the Purple Cap in IPL 2013.

He was the leading wicket taker of the tournament with 32 wickets at an average of 15.53 with best bowling figures of 4/42.

He became the first person in history of IPL to take 32 wickets, previous best being 28 Wickets taken by Lasith Malinga in IPL 2011

He was followed by James Faulkner of Rajasthan Royals with 28 wickets and Vinay Kumar of Royal Challengers Bangalore with 23 wickets.