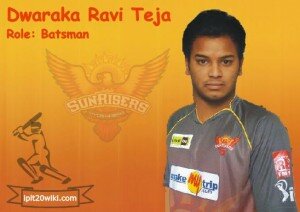 Born on 5th September 1987, Dwaraka Ravi Teja is an Indian First Class cricketer who plays for Hyderabad in the domestic cricket. He also plays in the Indian Premier League.

He is a right-handed opening batsman who at times bowls Legbreak googly.

He has been playing with the Deccan Chargers since the inception of the IPL tournament in 2008. In his IPL career he has played at different positions, returning with a mixed bag of runs to show.

He will play the IPL 2013 season for new owners of the team from the Deccan under the Sunrisers Hyderabad banner.