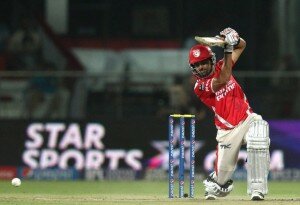 Having won the toss at the Feroz Shah Kotla Stadium in Delhi, Kings XI Punjab elected to field first.

For Kings XI Punjab, Sandeep Sharma and Ben Hendricks picked up three wickets each while Akshar Patel picked up one wicket.

Chasing this modest total, Kings XI Punjab had a quick start once again with openers playing well. Manan Vohra scored 42 runs of just 19 balls while Virender Sehwag scored 23 runs of 22 balls. But then a few wickets fell and Punjab were 95/4 in the 10th over with both Miller and Maxwell being dismissed cheaply. Kings XI Punjab got under pressure and lost a few wickets in the middle overs but Akshar Patel played well scoring unbeaten 42 of 35 balls. In the end team chases the target loosing 6 wickets with just 2 balls to spare.

Akshar Patel was named the Man Of The Match for his brilliant batting performance in the match.