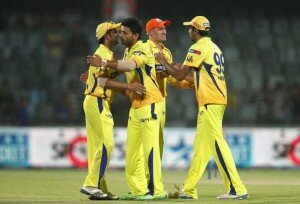 In the first qualifier of Season 6 of the Indian Premier League (IPL 2013),  Chennai Super Kings defeated Mumbai Indians by 48 Runs to become the first team to reach finals of Pepsi IPL 2013.

For Mumbai Indians, Kieron Pollard was the lone wicket taker.

In reply, Mumbai Indians Aditya Tare early but Dwayne Smith played a good innings scoring 68 of 28 balls but once he was dismissed by Jadeja, Mumbai Indians kept on loosing wickets and in the end got all out for 144 runs in 18.4 overs.

Please find below the Full Match Highlights Video of the Chennai Super Kings vs Mumbai Indians (CSK vs MI) – IPL 2013 Qualifier 1 played at the Feroz Shah Kotla in New Delhi.

This 19 minute match highlights video of the Chennai Super Kings vs Mumbai Indians IPL 2013 match covers all the fours, sixes hit and the wickets that fell.