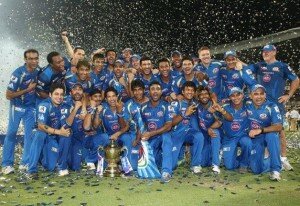 This was their first IPL title in six years.

Mumbai Indians won the toss and elected to bat first. They lost a few wickets early but then Ambati Rayadu scored 37 of 36 balls and Kieron Pollard scored unbeaten 60 runs of 32 balls to help Mumbai Indians reach a score of 148/9 in 20 overs.

In reply, Chennai Super Kings lost two wickets in the first over itself and never recovered. They kept on loosing wickets at regular intervals. MS Dhoni was the top scorer with unbeaten 63 of 45 balls but his performance alone was not enough to win the match for his team and at the end the team ended their 20 overs on a score of 125/9.

Kieron Pollard was named Man of the Match for his brilliant batting and bowling effort.

Please find below the Full Match Highlights Video of the Chennai Super Kings vs Mumbai Indians (CSK vs MI) – IPL 2013 Final Match played at the Eden Gardens in Kolkata.

This 27 minute match highlights video of the Chennai Super Kings vs Mumbai Indians IPL 2013 match covers all the fours, sixes hit and the wickets that fell.