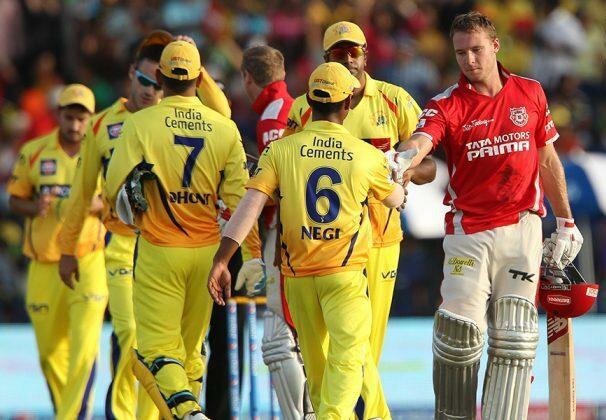 Having won the toss at the Sheikh Zayed Stadium in Abu Dhabi, Chennai Super Kings won the toss and captain MS Dhoni decided to bat first.

Dwayne Smith and Brendon McCullum launched the CSK innings with a powerful start scoring 70 without loss by the time the sixth over drew to a close. In the process, they clocked their best powerplay score in IPL competition. They did not stop there and continued to play well.

Thanks to their performance and some good contributions by Raina and captain Dhoni, the team posted a total of 205/4 in their 20 overs.

In response, Cheteshwar Pujara (13 runs) and Virender Sehwag (19 runs) got KXIP off to a brisk start but it was Glenn Maxwell who proved to be a match winner for the team. He scored 95 runs of just 43 balls to seal the match for the Punjab based franchisee. He hit 15 fours and 2 sixes in this innings.

He was supported well by David Miller who scored unbeaten 54 runs of 37 balls.

Glenn Maxwell was named Man of the Match for his match winning innings.