Ankeet Chavan gets bail to get Married : IPL Spot-Fixing Scandal 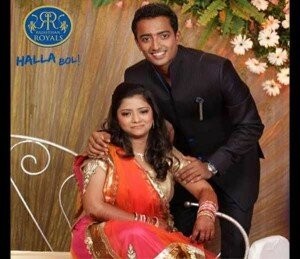 Yesterday, tainted cricketer Ankeet Chavan was given conditional bail by a Delhi court for his marriage and will have to return to jail by June 6, 2013.

Ankeet Chavan had sought bail for his marriage which had been fixed for June 2, 2013 with his fiance Neha Sambari. He has been given bail on a bond of Rs 1 lakh and a surety of the same amount.

Ankeet Chavan was earlier arrested on 16 May 2013 along with his Rajasthan Royals team mates S Sreesanth and Ajit Chandila on charges of spot fixing in IPL 2013 matches.

Ankeet Chavan has reportedly confessed to fixing and has described it as a huge mistake in his part.

According to media reports, Neha Sambari has been Ankeet Chavan’s girlfriend since last eight years. She is an IT consultant.

In an interview to a leading tabloid, Neha said, “I will wed Ankeet on Sunday, but I am already married to the family. I did not even once think of backing out,” she said.

She also believes Ankeet Chavan is innocent and that his innocence will be proven soon.

According to media reports, Ankeet and Neha, met each other while they were studying at DG Ruparel College and got engaged on July 1 last year.

Anways we wish Ankeet Chavan and Neha Sambari a Happy Married Life Ahead !!!