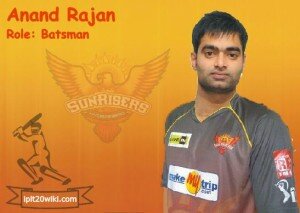 Born on 17th April 1987, Anand Rajan is an Indian First Class cricketer plays for Madhya Pradesh in the domestic cricket. He also plays in the Indian Premier League.

Anand Rajan is a right-arm medium fast bowler and a right-handed batsman.

He was a part of Royal Challengers Bangalore squad in IPL 2009 but never got a chance to play. He made his debut in IPL 2011 playing for Deccan Chargers. He also played on very few occasions in IPL 2012.

He will play the 2013 season for new owners of the team from the Deccan under the SunRisers Hyderabad banner.