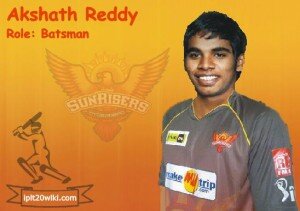 Akshath Reddy is a right-hand batsman.

Reddy’s idol is Rahul Dravid and compares his style of play to Australia’s Michael Hussey.

He made his IPL debut in 2012 playing for Deccan Chargers.

He played five matches in the season in which he scored 73 runs at an average of 24.33 and also took one wicket for the team.

He will play the IPL 2013 season for new owners of the team from the Deccan under the SunRisers Hyderabad banner.